February 21st is International Mother Language Day. To celebrate, next week we are asking everyone to share a song in an Aboriginal or Torres Strait Islander language on their Facebook page.

The campaign is being spearheaded by the Parkes Wiradjuri Language Team who were ambassadors for International Mother Languages Day last year, and have gone on to record their own song, Badu Ngahdi Mudyigaang Guwany: I am My Elders Blood, to be launched for the event this year. The song was written by Geoff Anderson, Lionel Lovett and the Parkes Wiradjuri Language group and is sung by Lionel Lovett and Tiyana Towney. Click here to listen to Badu Ngahdi Mudyigaang Guwany, and here to read a story about the production process.

Members of the 'I am My Elders Blood' production team

There may be a song in your language that is available for sharing, or you might like to record one. It could be an existing song, a translation of part of your favourite song, or something you have written. Even just a few lines is fine.

We are looking forward to a song filled week celebrating our languages.

This Sunday once again there will be a world wide Twitter campaign in celebration of UNESCO’s International Mother Language Day 2016.

People all around the world will be tweeting in their mother language to raise awareness of their languages. You can join the celebrations by tweeting in your language on February 21.

Participants will use the hashtag #MotherLanguage, along with the hashtag of their language (for example: #Yawuru #Adnyamathanha #Gunggari ).

Last year there were 111 Australian languages represented. So share this message with your Twitter followers and get tweeting this Sunday.

Further information on how to get involved is available on the campaign website.

Tag us @FirstLangAU if you would like us to retweet.

First Languages Australia would like to congratulate all the people who have worked tirelessly over the past ten years toward the opening of the Noongar Boodjar Language Cultural Aboriginal Corporation.

In the words of the Language Centre's Chairperson, George Hayden:
The opening of the Noongar Boodjar Language Centre is a tremendous step forward for the preservation and use of Noongar language. The centre has been established to ensure that all Noongar people have a place where the language is preserved and studied, where Noongar books are made, Noongar language classes held, stories recorded and resources made available for families.

Here are some photos of the opening celebrations. 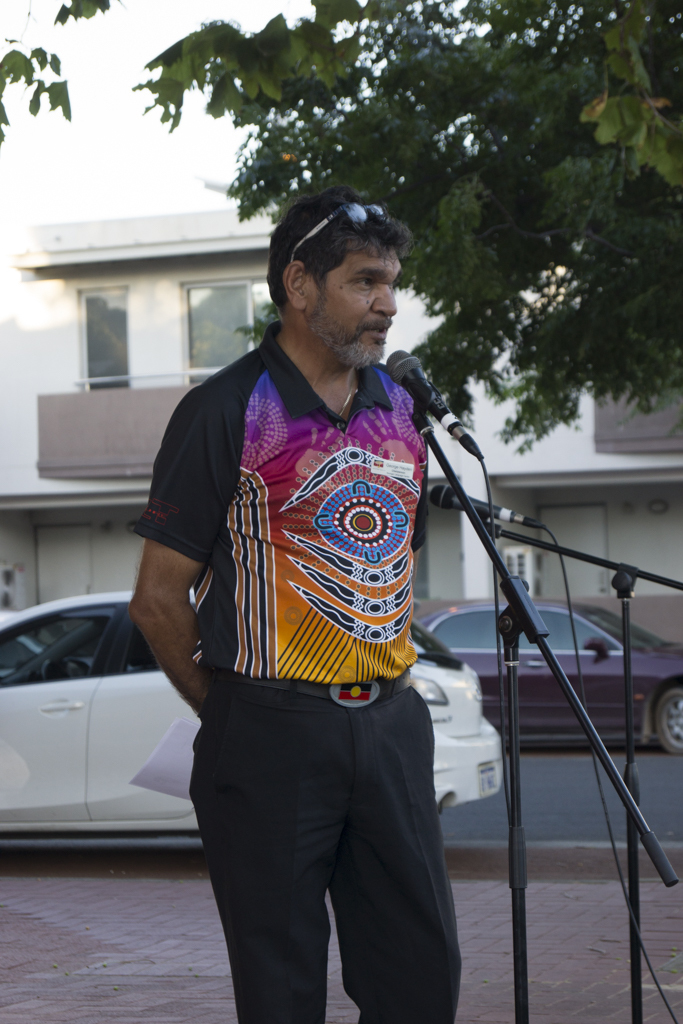 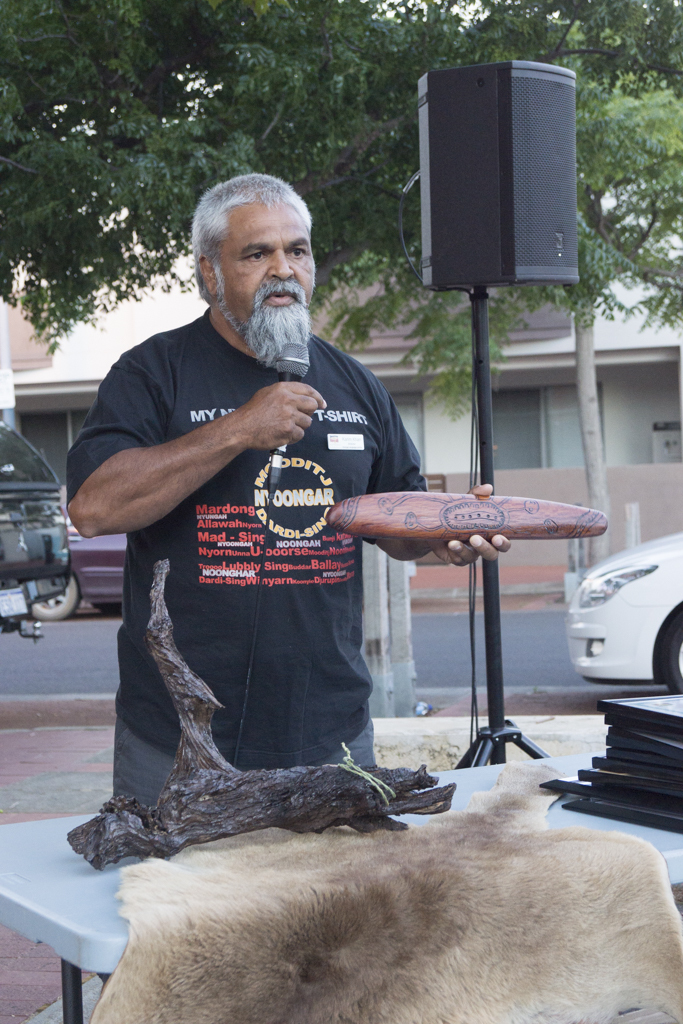 It was a pleasure to be able to invite nine of our younger language champions to Puliima 2015. Each of the Young Champions gave an engaging presentation on the work they are doing in their communities. They also attended numerious Puliima sessions and participated in breakout work facilitated by Yugambeh woman, and Cadets Manager for the PCYC, Sally Baisden.

The young champions each expressed their delight at being able to attend the forum and learning from the diverse language activities happening around the country.

Facilitator Sally Baisden has been working in youth development for over a decade. Sally reported that the opportunity to work with the group of dynamic and powerful Young Champions was very fulfilling.

"The forum was invaluable in strengthening our understanding of the immense body of work that is being conducted across the country in the realm of Indigenous languages and culture," Sally said.

A story by Rick Morton for The Australian

The community at La Perouse, with the help of the NSW government, has built a resource of words and phrases in the Dharawal language.
Community members have been trained in Certificate I and II courses and a K-6 syllabus is being developed.

Children are greeted with “Naggangbi” — “how are you?” — and farewelled with “Nandawabi” — “see you in the future” — each day.

“Sydney is in the Western world and for our community’s survival we have to engage,” Mr Ingrey said.

“But why not have both our worlds side-by-side?”

In one Canadian study of indigenous people, researchers ­observed a direct link between speaking their native tongue and reduction in suicide rates among their youth.

In British Columbia, those who reported less than half of a cohort with conversational knowledge of their language had suicide rates six times higher than those where a majority had language skills.

A story By Hannah Walmsley with Alex Sloan for the ABC.

Over the past few years Pintupi-Luritja people have been working to translate the United Nations Declaration of Human Rights into their languages.

Pintupi-Luritja is said to be the first language of about 2000 people in Central Australia, and the second language of many more people.

The United Nations Declaration of Human Rights is the world's most translated document, having been translated into more than 460 languages since it was first adopted by the UN General Assembly in 1948.

This is the first time it has been translated in to an Indigenous Australian language.

Read the full article at here.

The Australia's Got Language Talent Contest is part of the Puliima National Indigenous Language Forum, a biennial event hosted by Miromaa Aboriginal Language and Technology Centre. PUliima brings people together from all over Australia pioneering project ideas from community based Indigenous language projects all sharing a common ambition of preserving and celebrating the languages of our country.

The charasmatic and entertaining judges for the night were Leonard Miller from Far West Language Centre, Geoff Anderson from Parkes Wiradjuri Language Group, Vicki Couzens from Victorian Aboriginal Corporation for Languages and Karina Lester from the South Australian Mobile Language Team. Audience participation was loud and proud and extremely encouraged.

Filmed by First Languages Australia on location in a relaxed cocktail dinner setting, on the night of August the 28th 2013, Australia’s Got Language documentry is a low budget high entertainment program, celebrating and showcasing the depth and diversity of Aboriginal Language and Culture across Australia.

Australia’s First Languages are a wonderful and precious resource.

Australia is situated in one of the world’s linguistic hot spots. Australian languages are treasures of international significance. They are a bridge to rich and important information. When a language is lost a deep body of knowledge is lost with it.

Language is also key to Indigenous well-being in Australia. Australia will be a much better place when Indigenous language communities are strong and healthy and have the power to control their own destiny.

Language bridges the dark space between tangible and intangible cultural heritage. It is most tangible at the intersection between things. It is an interface for a people to connect with the world around them, with other people within their own language community, and with people from other language communities.

Language is also undeniably an interface within community, within an individual, and within a culture.

In the late 18th century, there were many hundreds of distinct Australian social groupings, and a similar number of languages. At the start of the 21st century, fewer than 150 indigenous languages remained in daily use, and all of them are highly endangered.

The good news is many language groups are working to preserve their languages and languages are quietly and persistently being restored to use. Our languages live on.

Together with hundreds of people and organisations around the country. First Languages Australia is working to make sure these treasures are not lost and that they continue to live on strong and vibrant. We invite you to join us on this exciting journey.

A story by Bruce Pascoe published in the AEU News, the Magazine of the Victorian Branch of the AEU, Vol 21, Issue 3, May 2015.

First Languages Australia is working with Australia's major libraries and archives to implement the National Indigenous Collections Strategy (2013). Since 2010, the group has been meeting with, and coordinating meetings between, representatives from key state and national collecting agencies. The outcome of these discussions was formulated in to a strategy document which was published last year.

Exciting projects are already being implemented by a number of our major libraries and archives.

From training through to employment, First Languages Australia is working with policy makers and educators to help overcome the issues facing those involved with the teaching and learning of first languages.

Efforts are currently being directed to the following strategic and policy areas:

Through 2019-2022, First Languages Australia has funds from the Department of Education, Skills and Employment to support the development of Indigenous language teachers and the teaching of Indigenous languages to boost the long-term uptake of Aboriginal and Torres Strait languages in Australian school classrooms, though Yalbilinya: National First Languages Education Project. Yalbilinya consists of the following three streams of work:

The current work builds on the National Indigenous Languages Teaching and Employment Forum hosted by First Languages Australia in Adelaide, November 2016. The forum brought together 100 representatives of language centres, Departments of Education in each State and Territory, first language teachers, universities and TAFEs with involvement in the training of language teachers, and other significant stakeholders. The forum was the first step towards the development of a national strategy for the training and employment of Indigenous language teachers.

Thank you for organising and facilitating the Forum. We felt privileged to be part of the Forum, gained insight into the amazing work that is happening all over the country and made many new friends.

Following the 2016 forum, First Languages Australia worked with each of the states and territories to compile Nintrianganyi: National Aboriginal and Torres Strait Islander Teaching and Employment Strategy, and the companion document Global lessons: Indigneous languages and multilingualism in school programs. These resources are designed to help education departments, schools and local communities understand what is needed to sustain the provision of a local language curriculum.

First Languages Australia has also developed some engaging tools that teachers can use in cross-curricular and Indigenous language programs, including the Gambay languages map and Marrin Gamu.